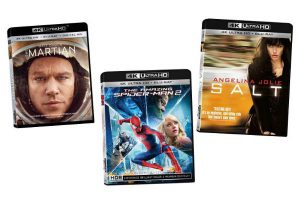 There’s been a lot of talk as of late regarding both streaming and disc content being slow in coming for those of us with that awesome new 4K TV. 20th Century Fox, Sony, and Warner Bros. announced recently the release of 4K Ultra HD discs at some point in 2016. The Martian, due out in March priced at $29.99 will be the first and is now available for preorder on Amazon. With this lineup of heavy hitters in the motion picture industry it looks like lots of great stuff on its way.